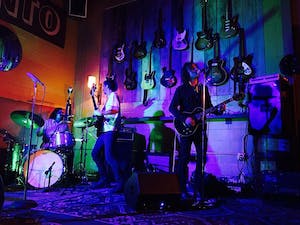 "Oakland dwelling musician Levi Thomas spent the first half of his twenties in his hometown of Springfield, Missouri as a singer and guitarist in the scuzz-psych outfit, Ghost Dance, releasing one album and extensively touring the Midwest and South. In 2014 he began writing what would later become his debut album, Billie. Conceived partially in Missouri with his eyes on the coast and completed upon arrival in Oakland, Billie is an ode to the timeless American tale of heading west looking for rebirth."

" In her debut release, Beach Sleeper, Desiree Cannon leaves everything on the studio floor – the studio, in this case, is the living room of a 1920s Oakland house littered with records and a variety of 1970s and 80s analog recording equipment. She invites you in, offers you a glass of whiskey, and then proceeds to read every page of her diary from the last 10 years and burn each one in the brick fireplace. The recording of Beach Sleeper was an extension of her life, which these days is lived mostly between the industrial shoreline and the dimly-lit corners of Oakland. The album was recorded with friends, in a comfortable space, with a focus on capturing a true experience. Beach Sleeper is all sides of Desiree’s songwriting and spirit: the sparse country ballad, “Low Flyin’ Angel”, the soulful 50s heartbreak anthem, “Oh Darlin”, the haunting psychedelic saga, “Train Man,” and the heavy, yet sparkling, “Mountain Lion Mama”. The album is heart-worn, complicated, and raw – it’s recommended for anyone who understands the complexity of human emotion and isn’t afraid to cry."